TOWARD A NUCLEAR FREE WORLD

Reporting the underreported threat of nuclear weapons and efforts by those striving for a nuclear free world.
A project of The Non-Profit International Press Syndicate Group with IDN as flagship agency in partnership with Soka Gakkai International in consultative
status with ECOSOC.

TOWARD A NUCLEAR FREE WORLD was first launched in 2009 with a view to raising and strengthening public awareness of the urgent need for non-proliferation and ushering in a world free of nuclear weapons. Read more.

UNITED NATIONS (IDN) — The growing modernization of the world’s nuclear arsenal is threatening an increase of deadly weapons in the not-too-distant future.

One of the key findings is that despite a marginal decrease in the number of nuclear warheads in 2021, nuclear arsenals are expected to grow over the coming decade.

Wilfred Wan, Director of SIPRI’s Weapons of Mass Destruction Programme said: "All of the nuclear-armed states are increasing or upgrading their arsenals, and most are sharpening nuclear rhetoric and the role nuclear weapons play in their military strategies. This is a very worrying trend."

Although the total number of nuclear weapons declined slightly between January 2021 and January 2022, the number will probably increase in the next decade, the report predicted.

Of the total inventory of an estimated 12,705 warheads at the start of 2022, about 9,440 were in military stockpiles for potential use. Of those, an estimated 3,732 warheads were deployed with missiles and aircraft, and around 2,000—nearly all of which belonged to Russia or the US—were kept in a state of high operational alert.

The total warhead inventories of Russia and the US continued to decline in 2021, largely due to the dismantling of warheads that had been retired from military service several years ago, according to SIPRI.

The number of warheads in the two countries’ useable military stockpiles remained relatively stable in 2021.

But the deployed strategic nuclear forces of both countries were within the limits set by a bilateral nuclear arms reduction treaty (2010 Treaty on Measures for the Further Reduction and Limitation of Strategic Offensive Arms, New START).

The New START does not, however, limit total non-strategic nuclear warhead inventories.

Hans M. Kristensen, Associate Senior Fellow with SIPRI’s Weapons of Mass Destruction Programme and Director of the Nuclear Information Project at the Federation of American Scientists (FAS) said: "There are clear indications that the reductions that have characterized global nuclear arsenals since the end of the cold war have ended." 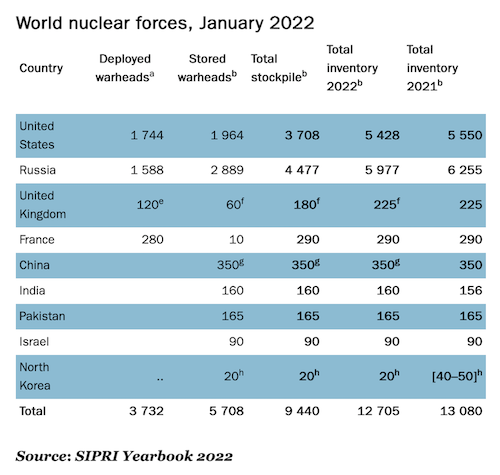 Asked for his comments, Tariq Rauf, former Head of Verification and Security Policy, IAEA, told IDN "following the extension of New START in February 2021 and the June 2021 Geneva meeting between Presidents of Russia and the United States, a tentative dialogue was started on strategic stability and further reductions in nuclear arms".

"This dialogue was suspended following the Russian invasion of Ukraine (last February) and now unfortunately there are no prospects of further nuclear arms reductions," he said, pointing out, that China-US nuclear arms control dialogue also is missing.

"The five NPT nuclear-weapon States now—the US, UK, France, Russia and China, who are also the five permanent members of the UN Security Council —are not fulfilling their NPT obligations on nuclear disarmament and the four other nuclear-armed States too remain outside any constraints.

"The world once again is in dangerous times with heightened risks of nuclear war and top leadership is lacking in all nine nuclear-armed States, with little or no prospects for improvement," Rauf warned.

Dr Rebecca Johnson, executive director of AIDD (Acronym Institute for Disarmament Diplomacy), who worked on the 1996 Comprehensive Test Ban Treaty (CTBT) and UN Treaty on the Prohibition of Nuclear Weapons (TPNW), told IDN: "Horrifyingly, we are now seeing the tragic consequences of governmental failures to abolish all nuclear weapons when the Cold War ended."

"Vladimir Putin’s nuclear threats after invading Ukraine show us the existential dangers for humanity of allowing any government to possess nuclear weapons," she said.

If not stopped and disarmed, she argued, the greed and short-sightedness of such political leaders may yet destroy the world—like the governments and industries that failed to tackle climate destruction decades ago because they were so in thrall to environmentally destructive fossil fuels.

"It’s up to us, the people, to act together to stop the nuclear addicts and gas guzzlers that are so demonstrably incapable of acting responsibly for global security."

Nuclear arsenals and bases began to be reduced because of civil society uprisings in the 1980s, but what resulted was not nuclear disarmament but a form of nuclear management, said Dr Johnson, who was imprisoned for campaigning against NATO’s intermediate-range nuclear missile deployments while living in the Women’s Peace Camp outside the Greenham Common nuclear base from 1982 to 1987.

After the Non-Proliferation Treaty (NPT) was indefinitely extended in 1995, nuclear arsenals carried on being upgraded. Inevitably, the number of nuclear-armed governments went up from five to nine, and these all kept increasing military expenditure.

"That’s why the vast majority of nations and peoples got together to bring the TPNW into force in 2021. Now we have to make this treaty work, in conjunction with International Humanitarian Law."

The priority, she said, should be to strengthen and embed the TPNW’s legal prohibitions, norms and requirements. Recognise the dangers attached to arguments from people who want to normalise nuclear threats and ignore the consequences of nuclear use by pontificating about tactical versus strategic weapons, or distinctions between first and second uses.

These spurious distinctions serve to justify retaliatory nuclear strikes, and so make nuclear war possible, with all the horrific consequences of mass murder, nuclear winter and global starvation. Regardless of the delivery range and warhead size, each and any nuclear use must be stigmatised and prosecuted as a crime against humanity, Dr Johnson declared.

According to SIPRI, the UK in 2021 announced its decision to increase the ceiling on its total warhead stockpile, in a reversal of decades of gradual disarmament policies. While criticizing China and Russia for lack of nuclear transparency, the UK also announced that it would no longer publicly disclose figures for the country’s operational nuclear weapon stockpile, deployed warheads or deployed missiles.

In early 2021, she pointed out, France officially launched a programme to develop a third-generation nuclear-powered ballistic missile submarine (SSBN).

India and Pakistan appear to be expanding their nuclear arsenals, and both countries introduced and continued to develop new types of nuclear delivery systems in 2021.

North Korea, meanwhile, continues to prioritize its military nuclear programme as a central element of its national security strategy. While North Korea conducted no nuclear test explosions or long-range ballistic missile tests during 2021, SIPRI estimates that the country has now assembled up to 20 warheads and possesses enough fissile material for a total of 45–55 warheads.

"If the nuclear-armed states take no immediate and concrete action on disarmament, then the global inventory of nuclear warheads could soon begin to increase for the first time since the cold war," said Matt Korda, Associate Researcher with SIPRI’s Weapons of Mass Destruction Programme and Senior Research Associate with the FAS Nuclear Information Project.

Elaborating further Johnson said that as the wars in Iraq, Afghanistan and Ukraine and other armed conflicts around the world make plain, militarism, nuclear threats and environmental destruction are part of a violent, patriarchal-industrial continuum of harm against us all.

Preventing nuclear war will take millions of honourable, courageous people to unseat the bullies and act together for disarmament and peace.

"Women are at the forefront of rejecting the violent threats and creating sustainable ways to build peaceful relations and share the Earth’s resources. That’s why I continue to write, speak and act for nuclear disarmament, climate justice and peace."

"I was in Glasgow for COP 26 and have put in a working paper on implementing the TPNW when the first meeting of TPNW States Parties meets at the end of June. The governments will follow our lead—if they can’t get away with threatening and using nuclear weapons, they will stop spending money on making and deploying them."

"We can stop nuclear weapons being used and abolish all the arsenals – we have to work together against war and make all international treaties and agreements work more effectively for disarmament, peace and the environment," she declared. [IDN-InDepthNews – 13 June 2022]

IDN is the flagship agency of the Non-profit International Press Syndicate.

We believe in the free flow of information. Republish our articles for free, online or in print, under Creative Commons Attribution 4.0 International, except for articles that are republished with permission.